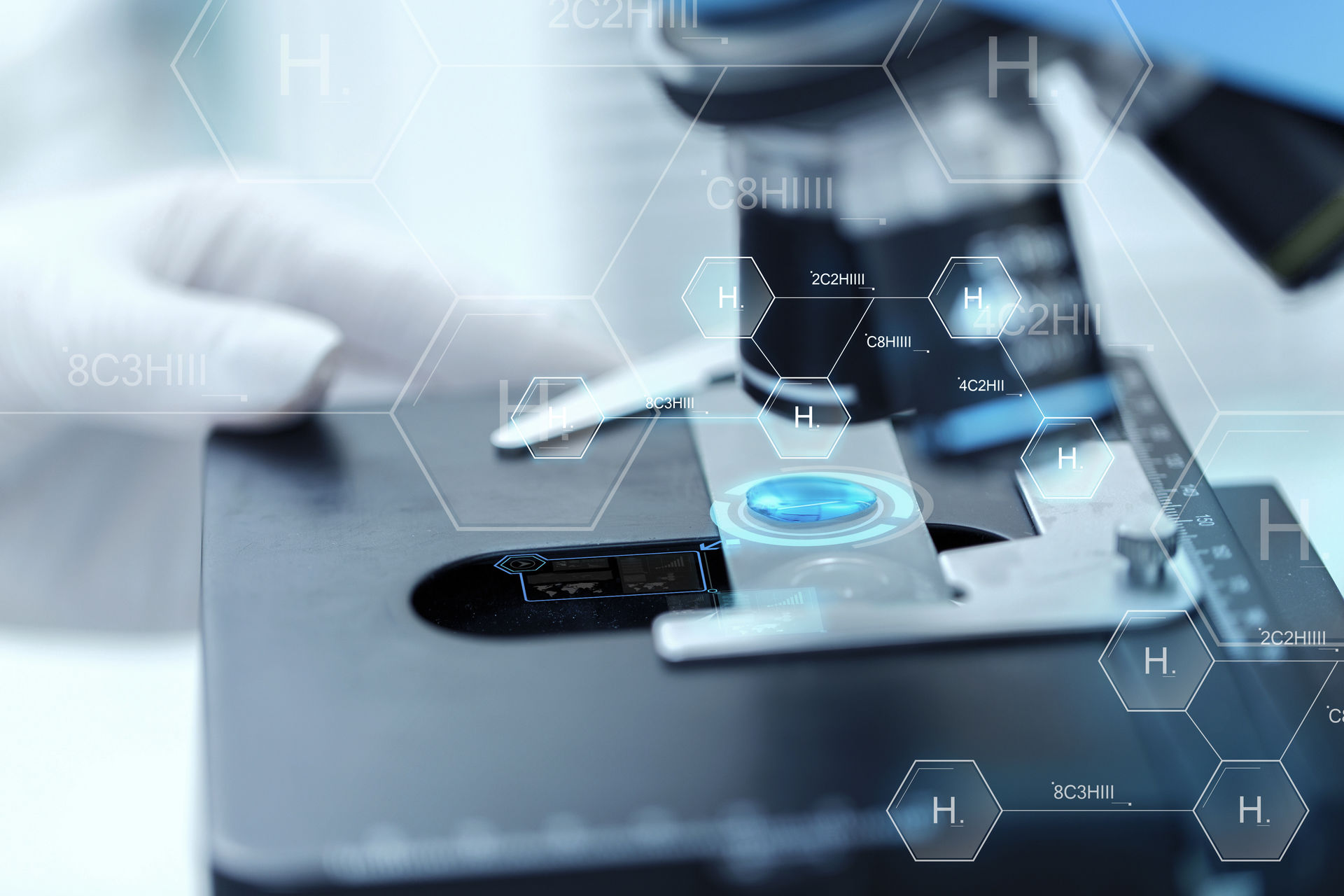 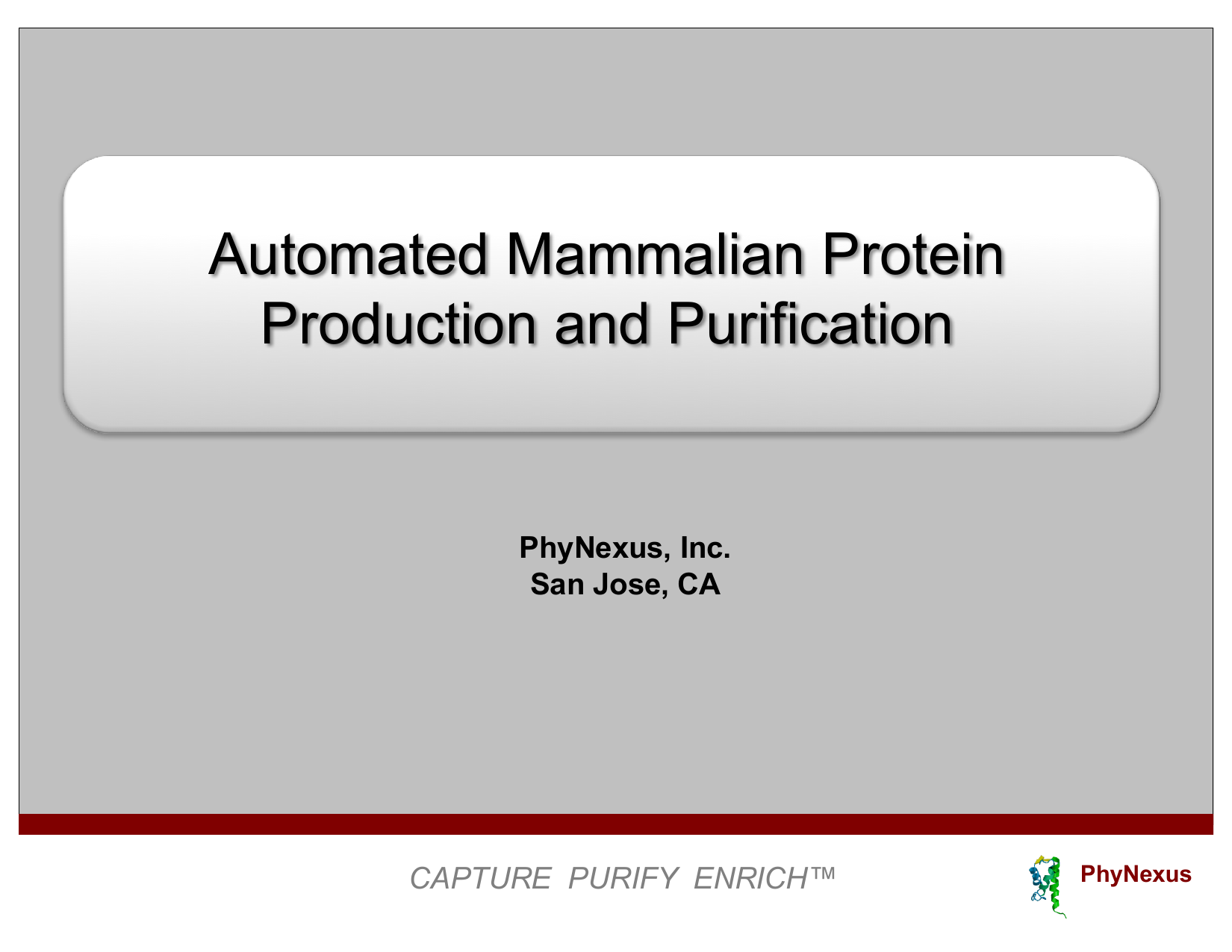 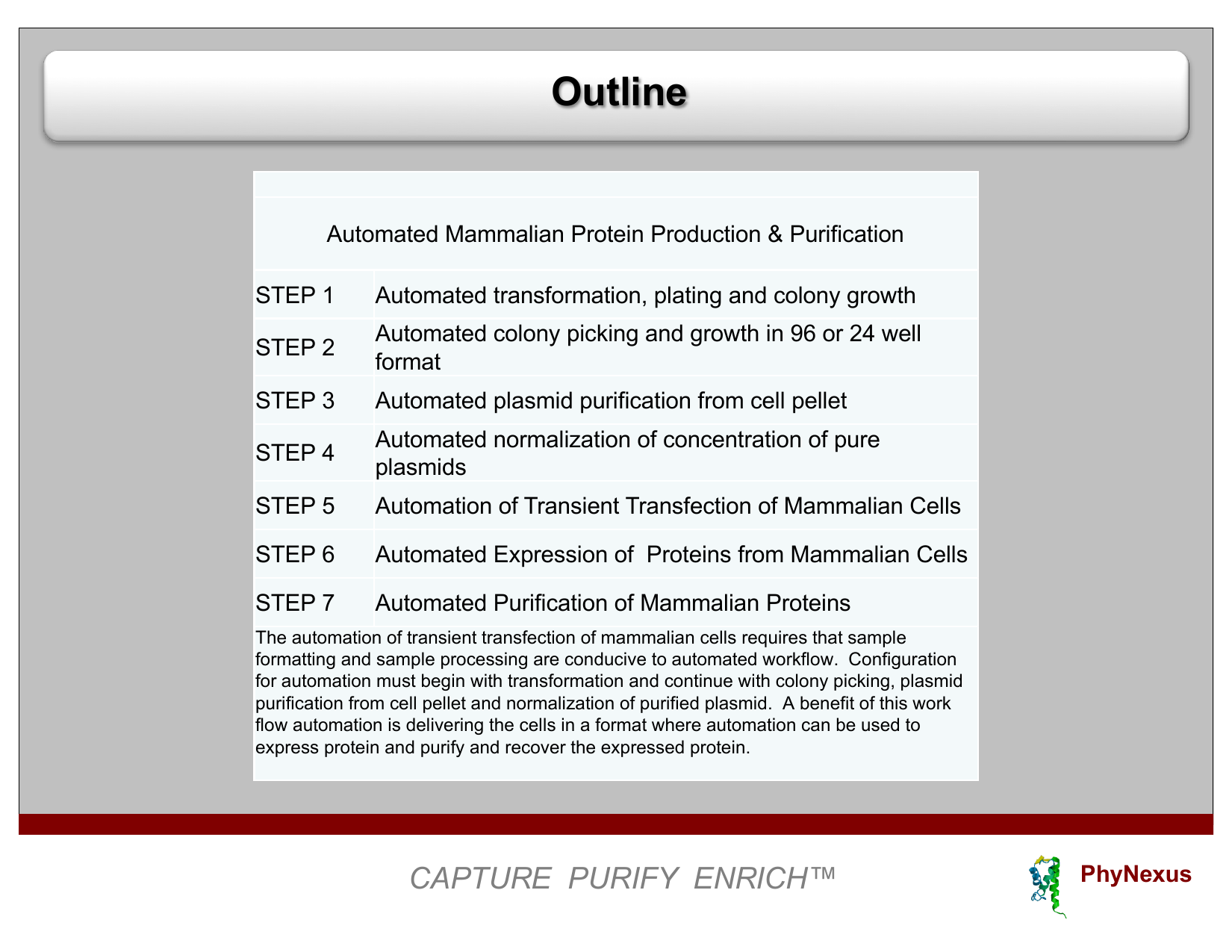 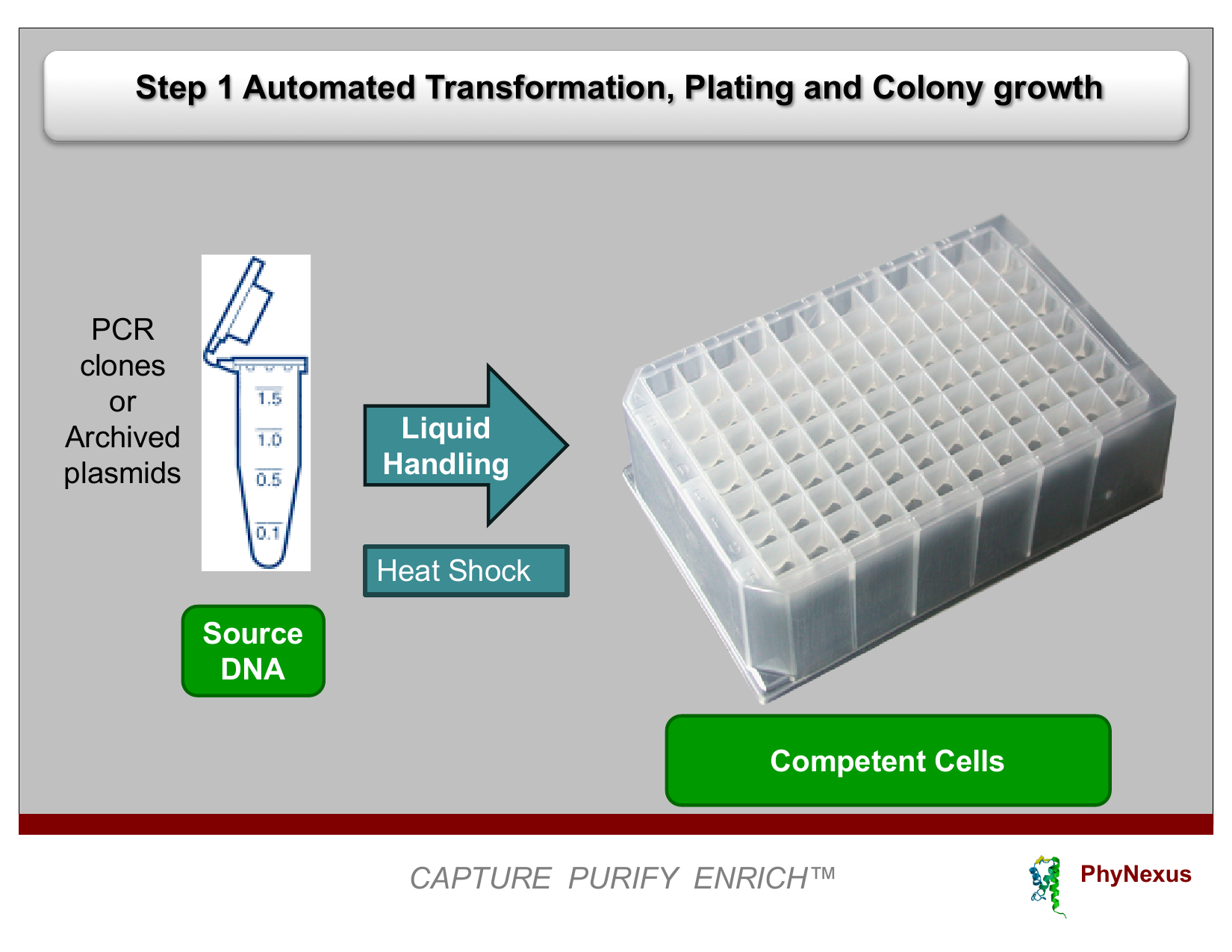 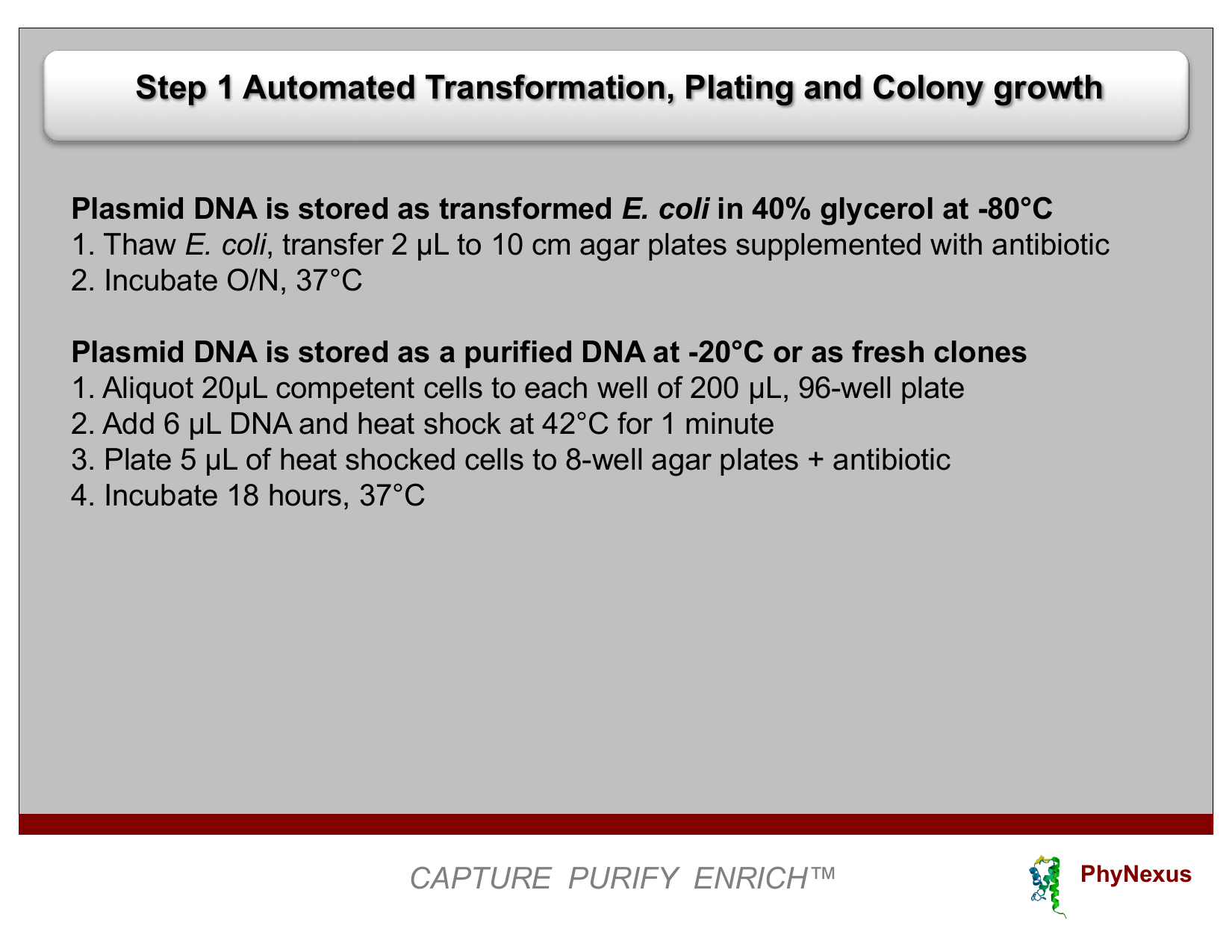 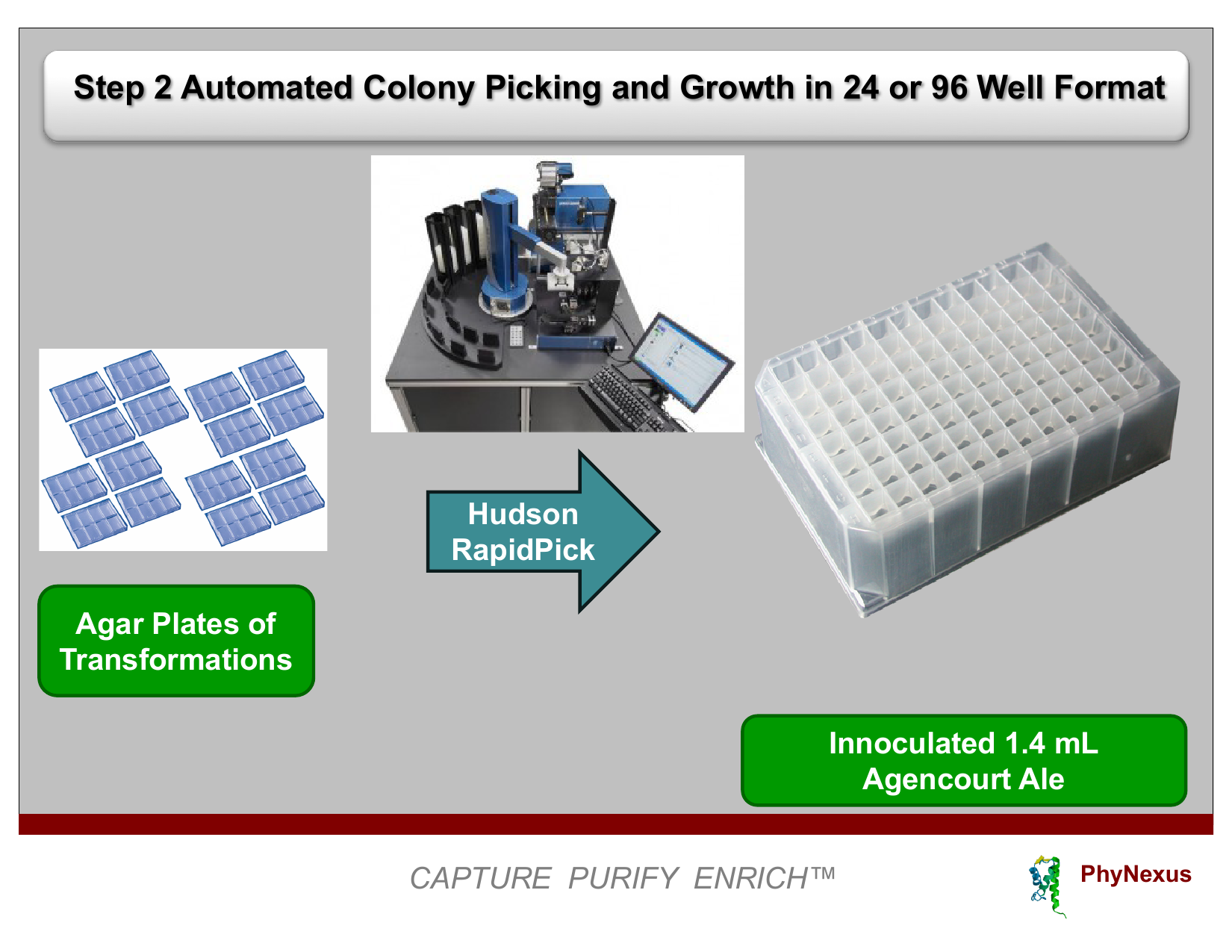 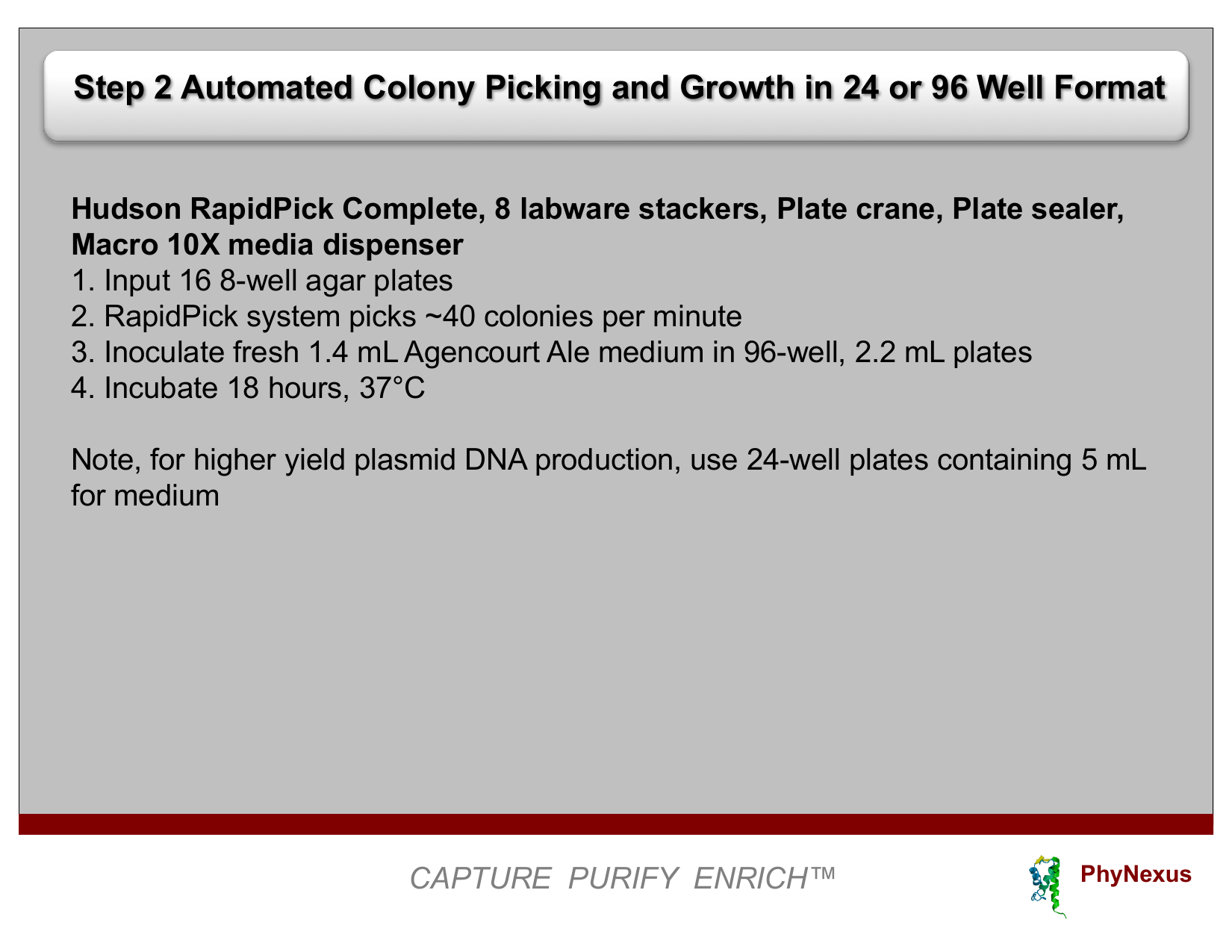 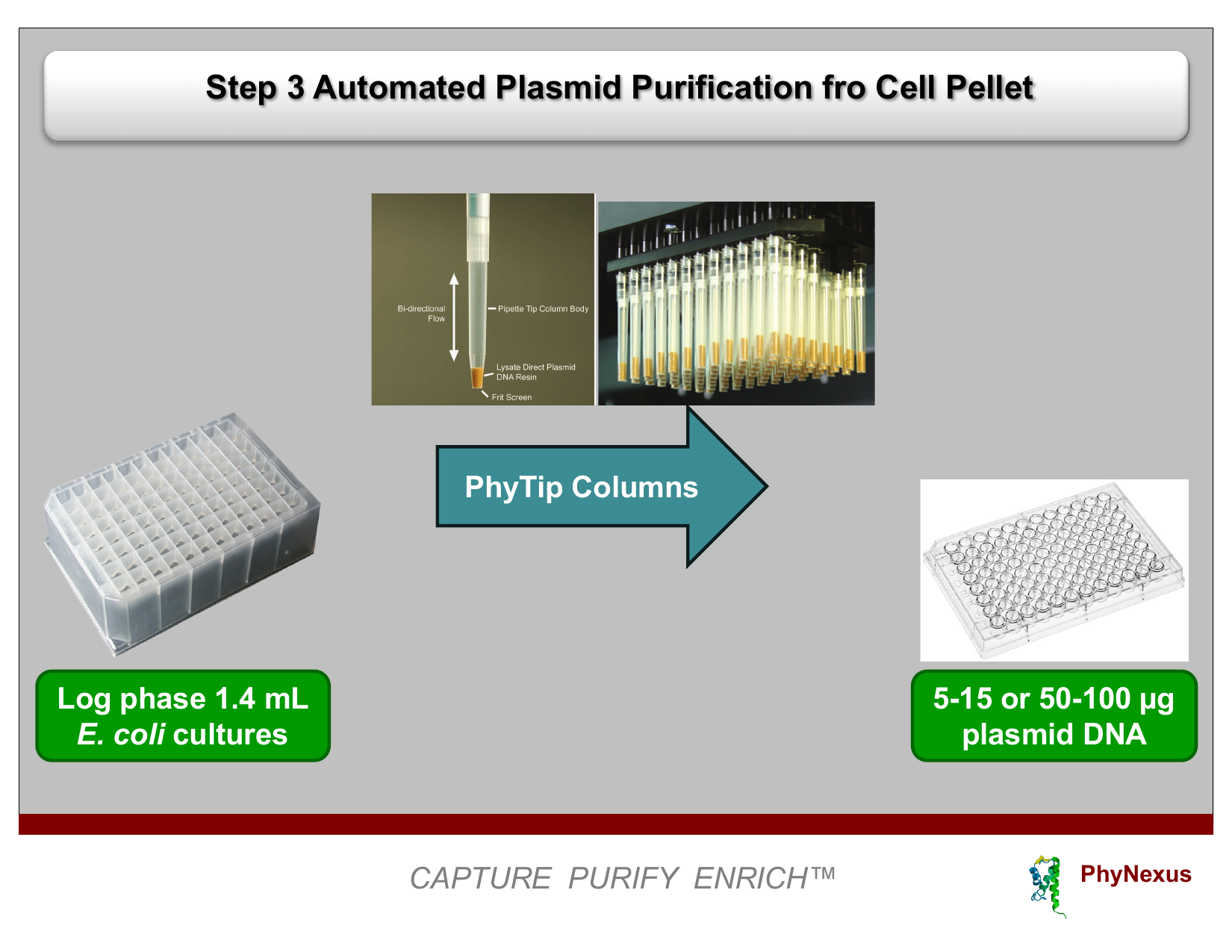 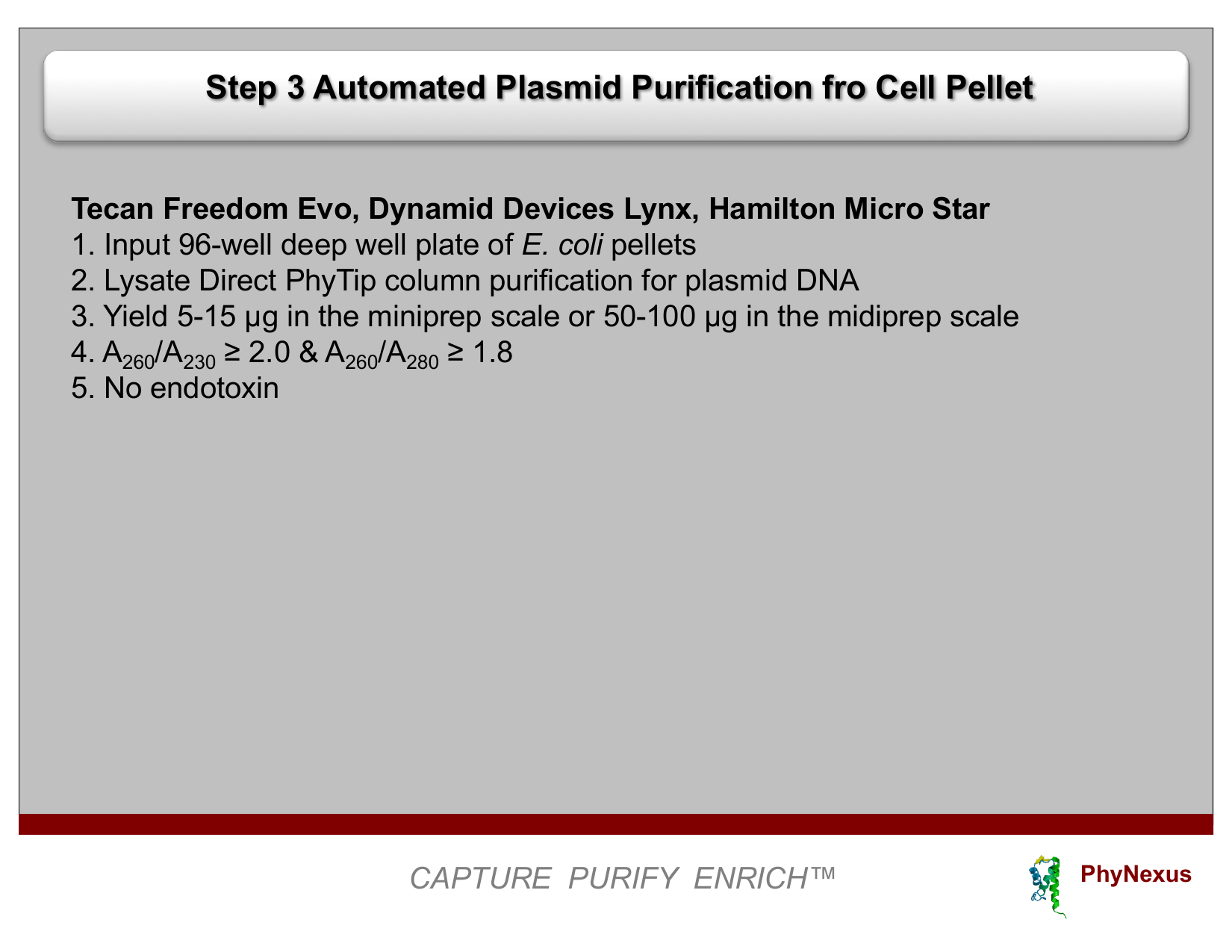 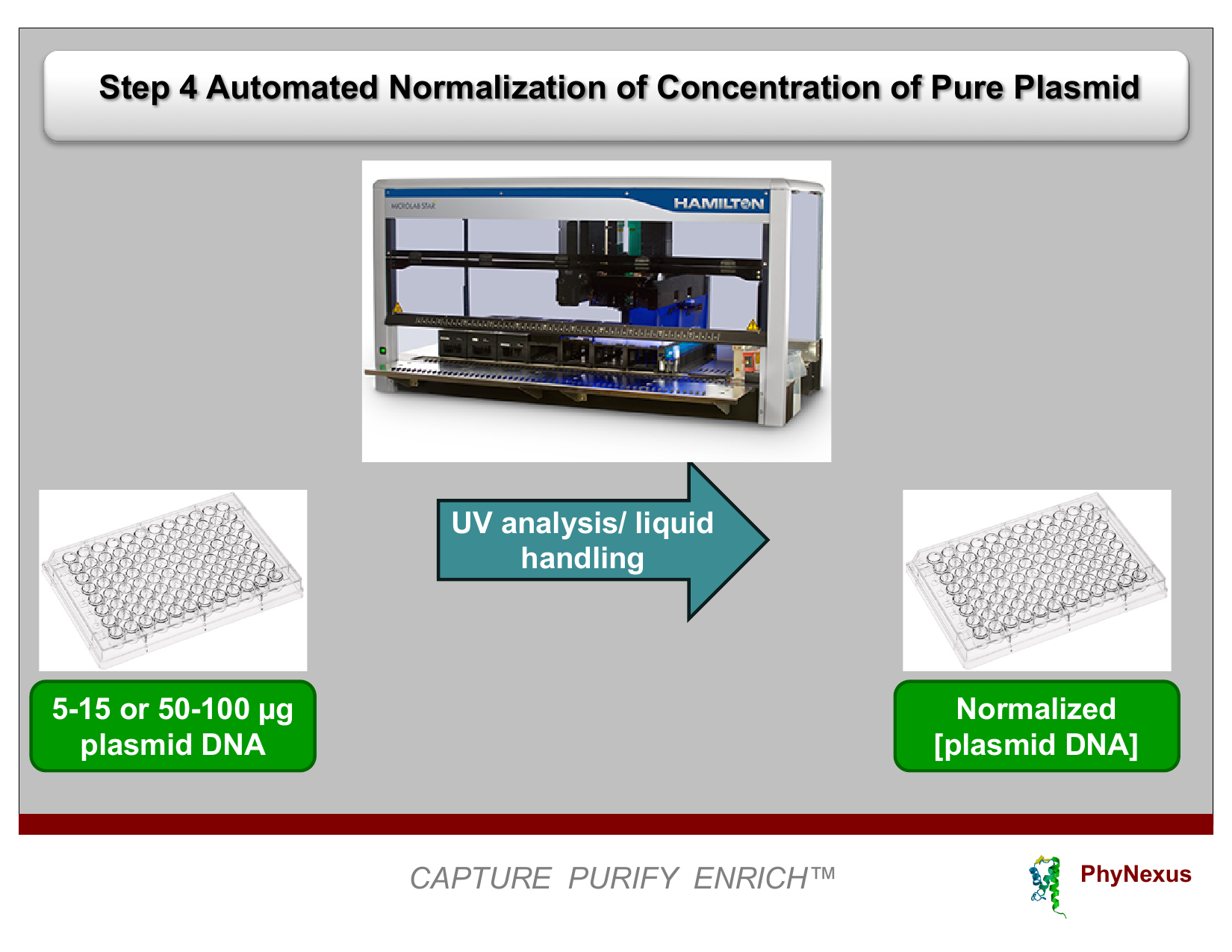 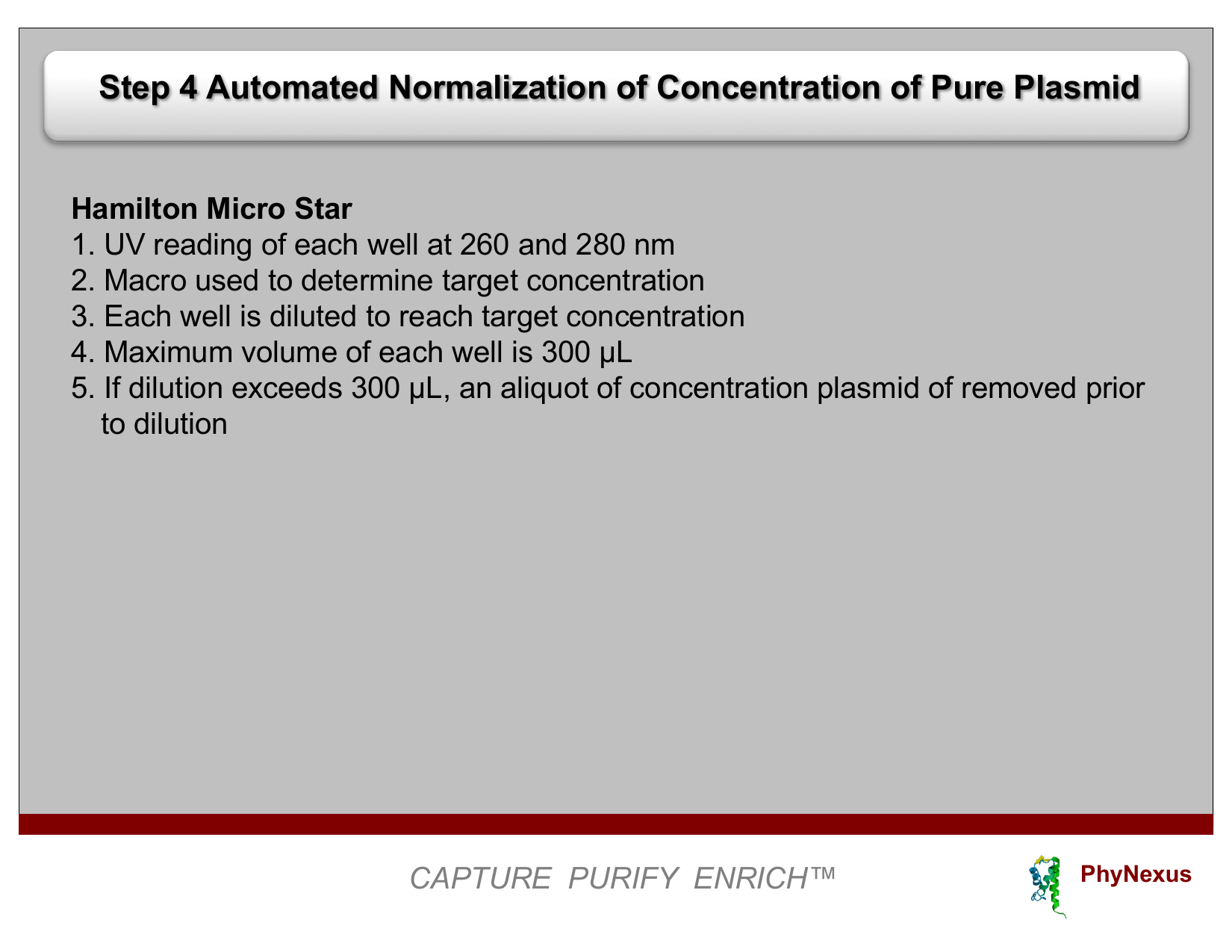 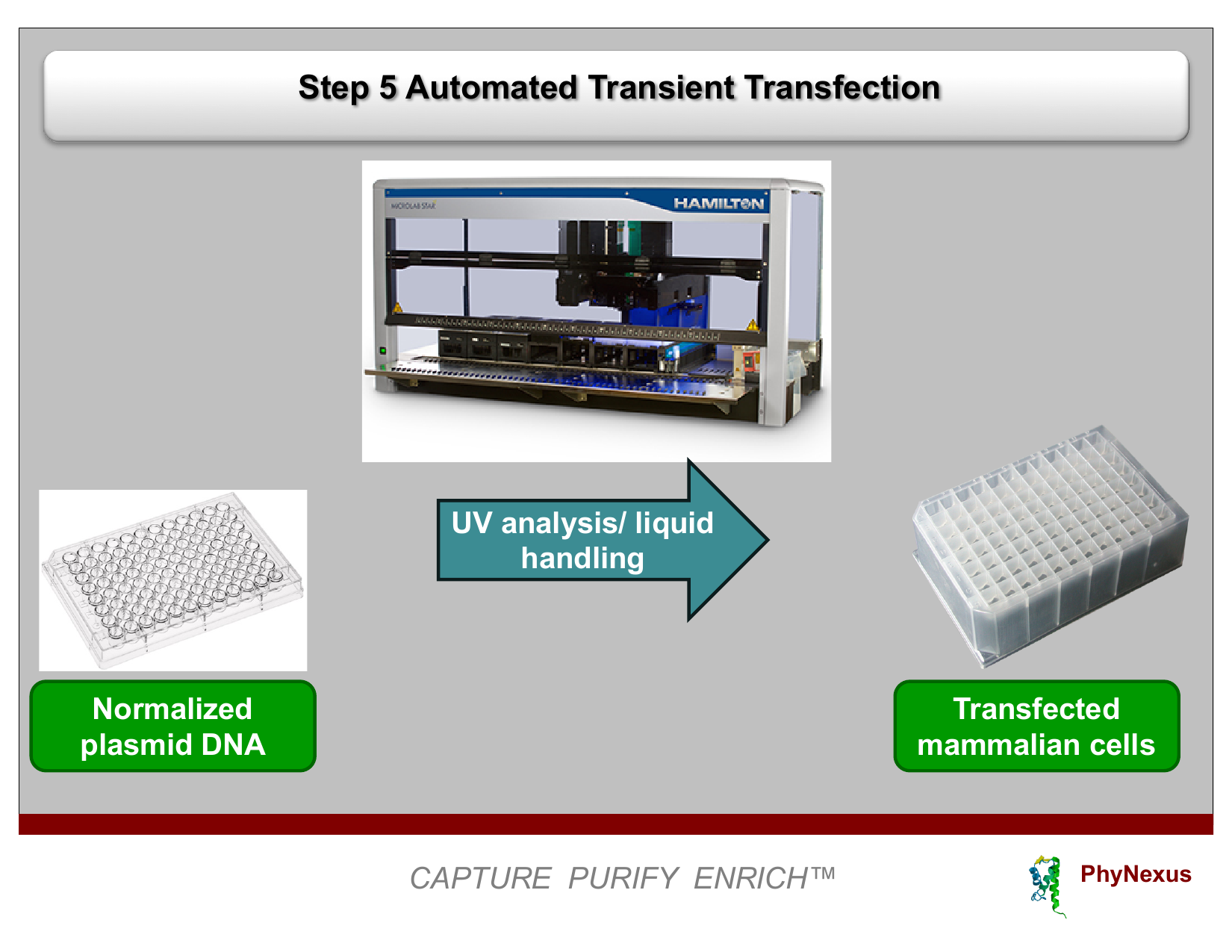 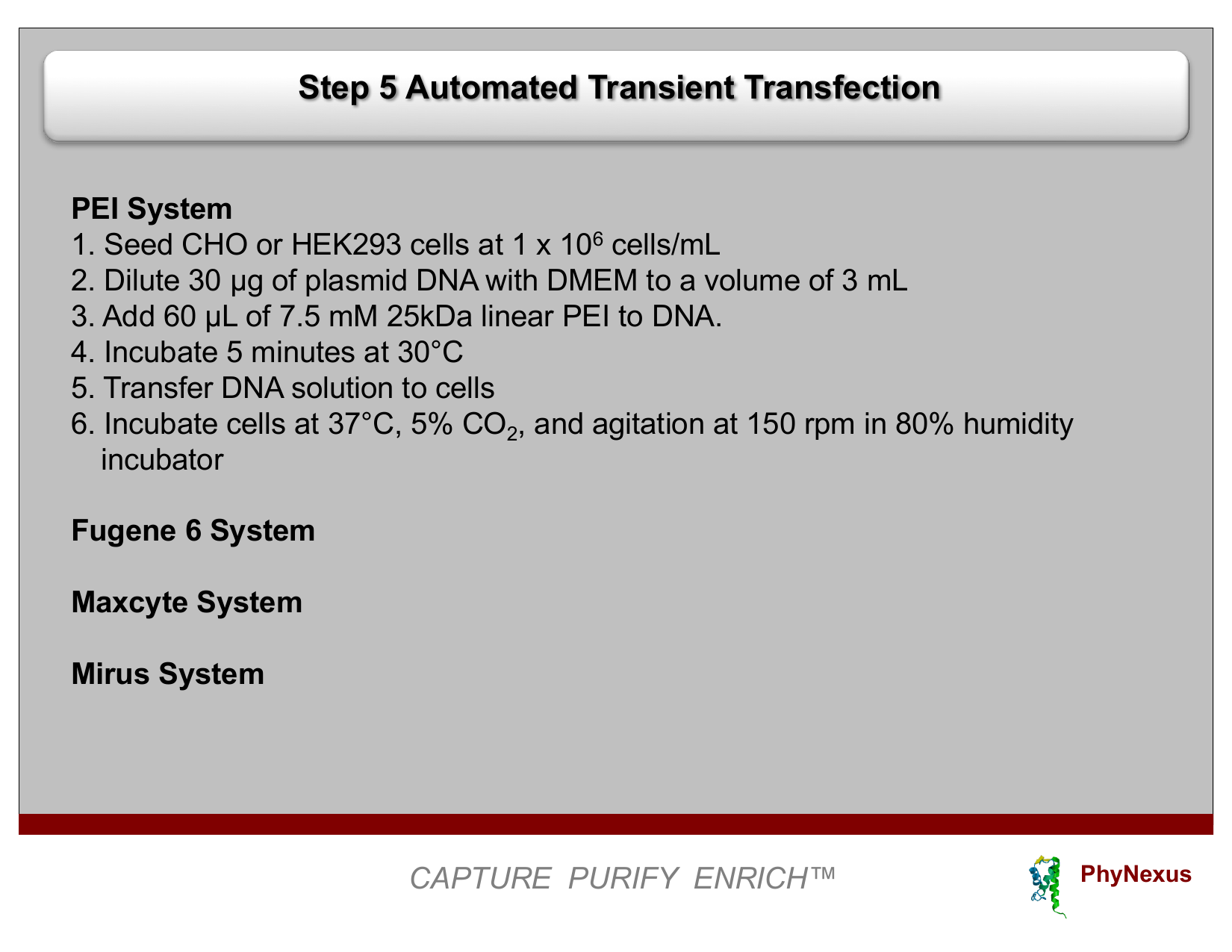 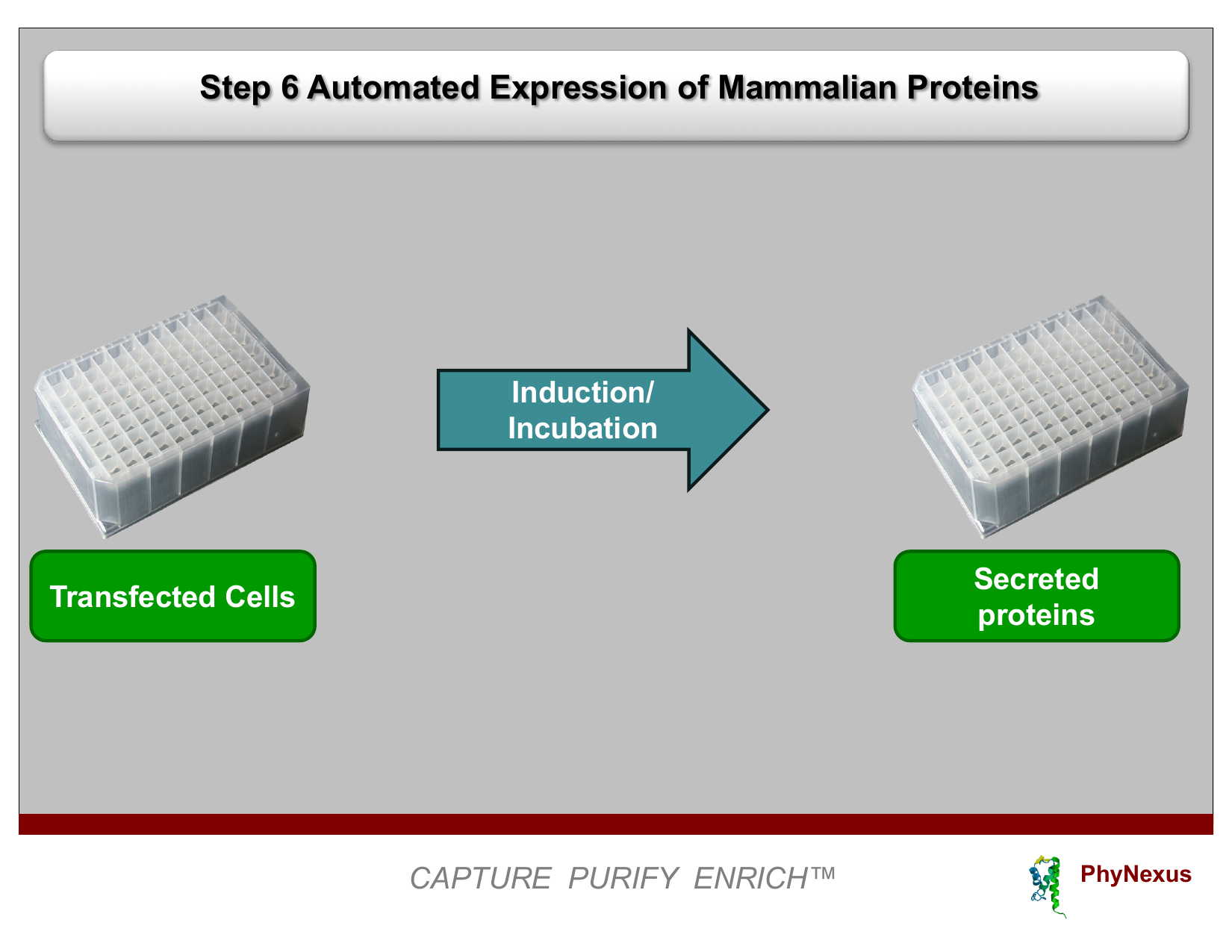 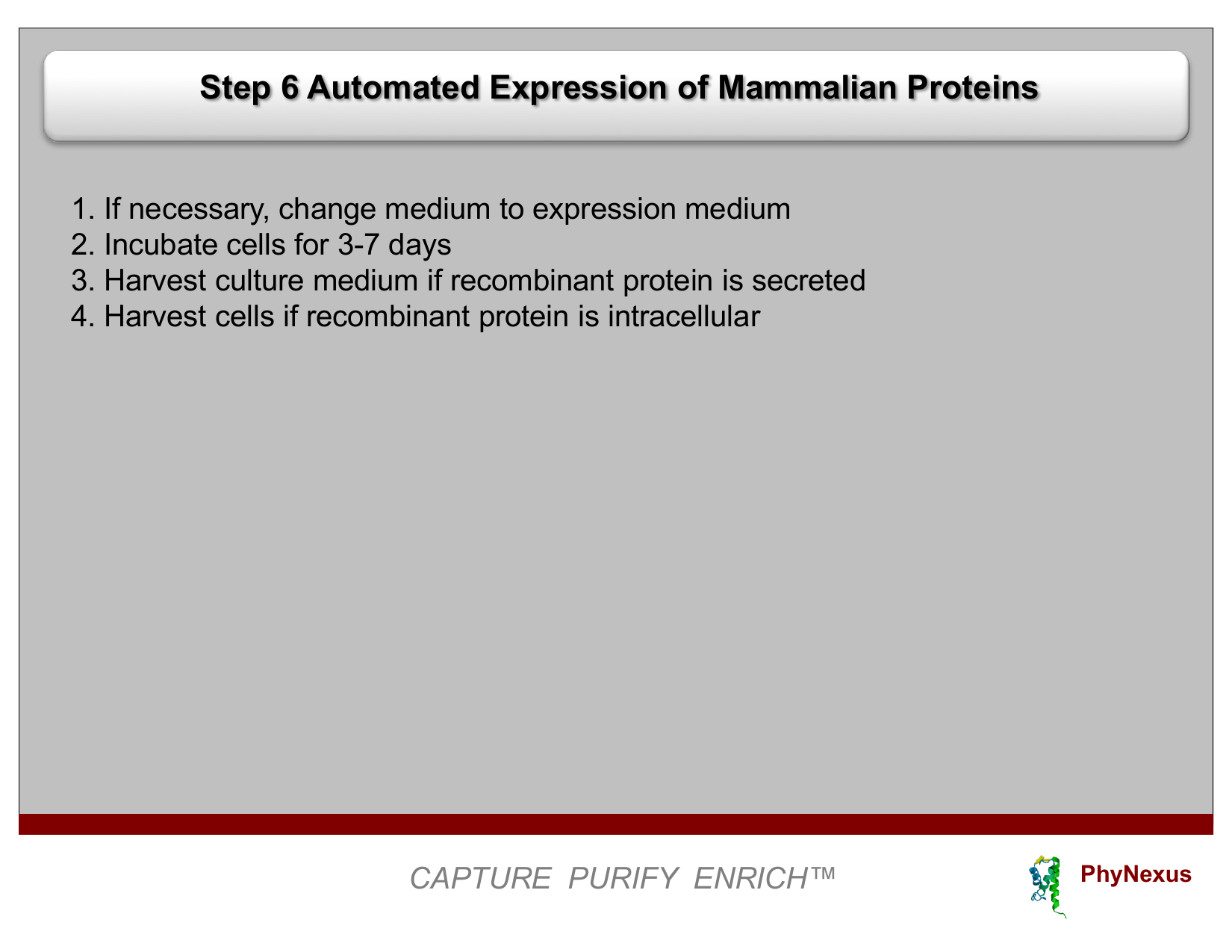 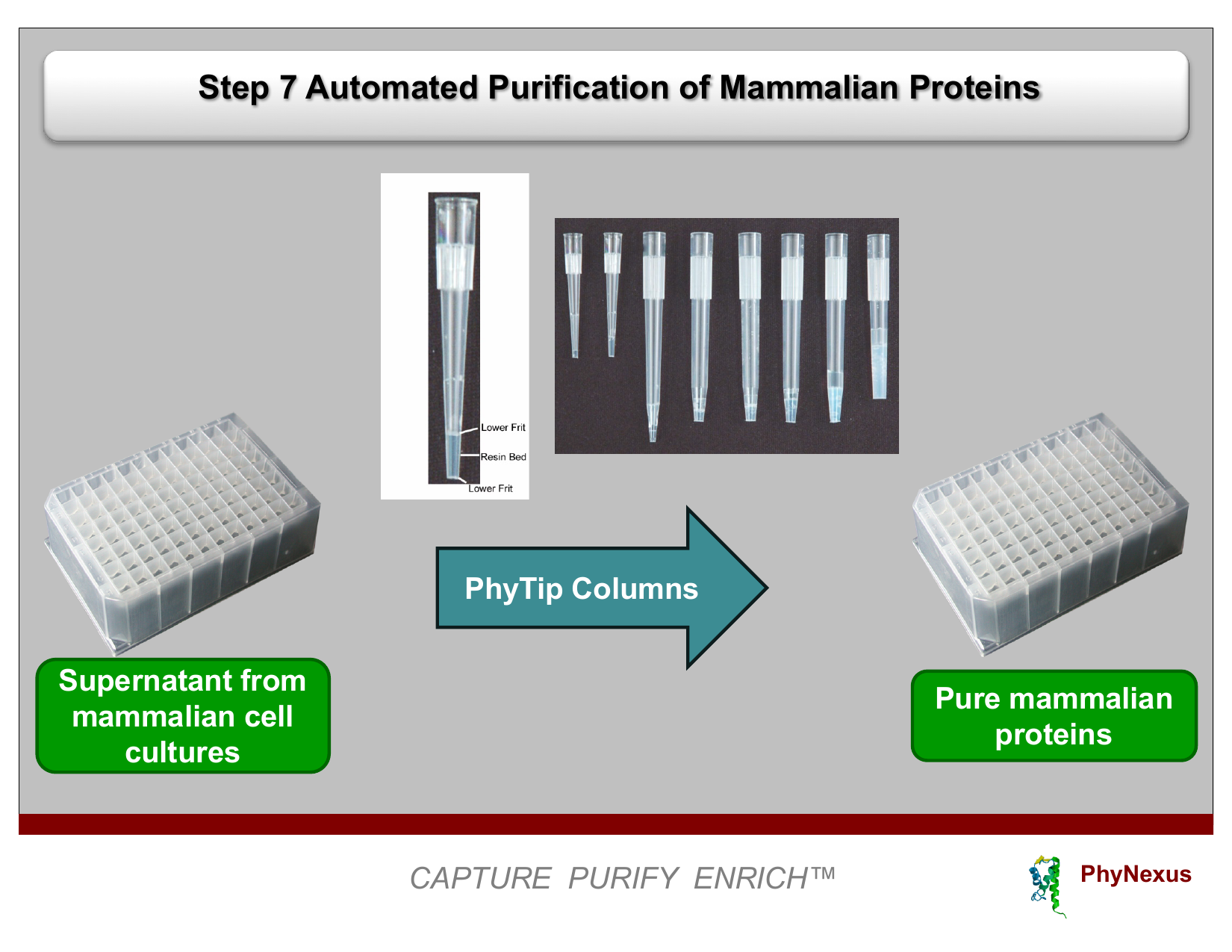 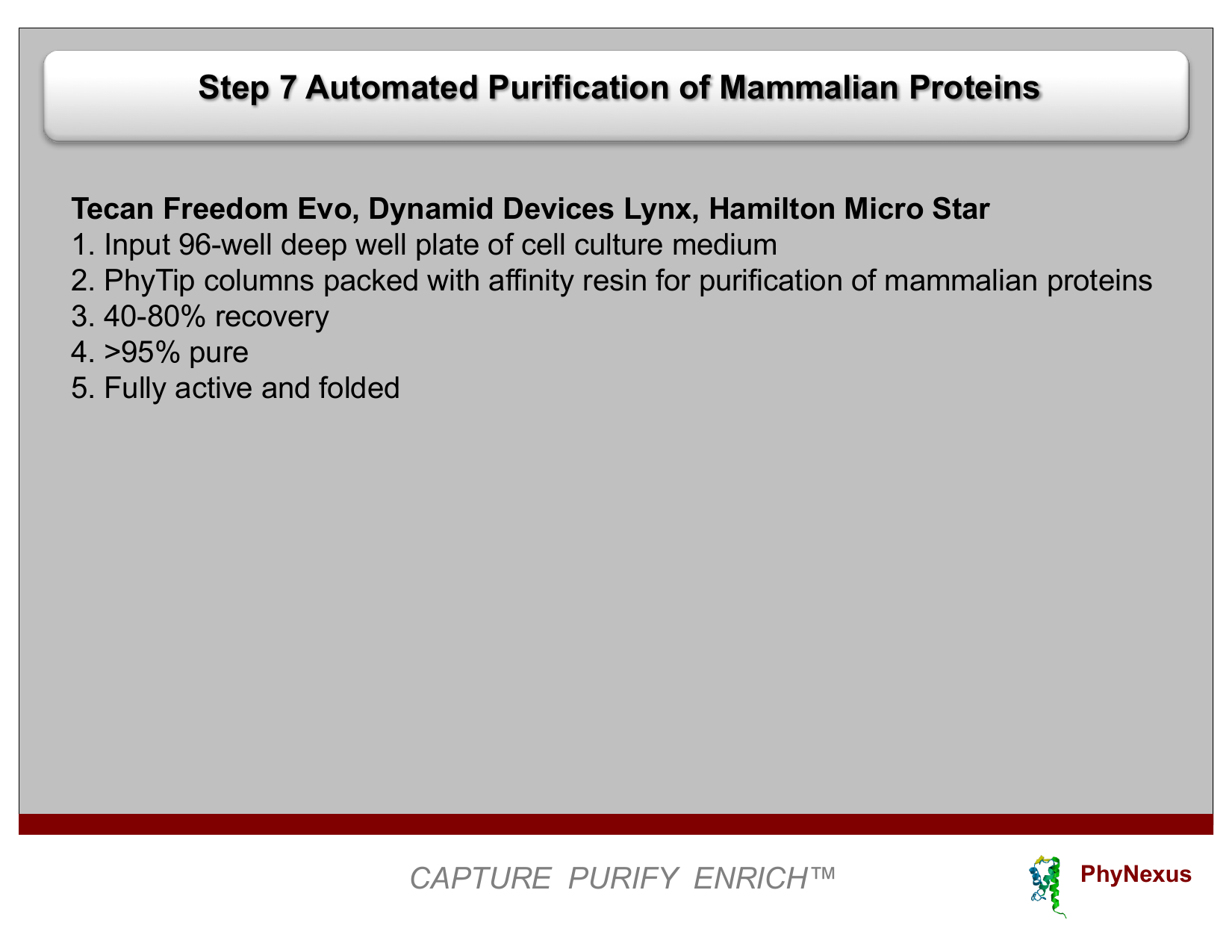 Researchers select genes that are related to a molecule of interest and submit DNA sequences. The sequences are cloned into plasmids using PCR cloning. Researchers may request a library of archived genes for screening against a target.  These genes are available from various sources as plasmids. A protein engineering campaign is carried out to create protein variants, perform affinity maturation or design a novel fold and function. These variants are generated through site-directed or random mutagenesis of a parental plasmid carrying the cloned gene of interest for produce plasmids and cloned using PCR cloning.

The PCR cloned or archived plasmids (which are only available in small mass quantities) are transformed with automation into a bacterial host cell to grow larger quantities of plasmid. Transformation of these plasmids is a form of quality assessment.  Heat shock is performed using automatable heated deck position.  No incubation neither cooling with ice nor shaking for growth is needed. The cloned genes and gene variants require transformation to become useable plasmids. Antibiotic resistance is used to select for positive clones.  The transformed bacteria with plasmids are plated onto agar plates supplemented with the appropriate positive selection marker such as an antibiotic. This process may also be automated.  Successful clones survive and grow into colonies.

Once the colonies reach an optimal size, a colony picking robot picks these colonies to inoculate larger cultures. Colony Picking may be automated with 96 well or 24 well growths. Picker software adjustment parameters include colony radius, amplitude, elongation, and separation from other colonies.

The cells are lysed with addition of reagent by a robotic pipette tip and plasmid is released into a mixture of liquid and debris. The suspension is precipitated with the addition by robotic pipette tip of a chaotropic reagent. A PhyTip column is lowered into the sample mixture of released plasmid and debris.  Sample is processed by back and forth flow into the column. The debris may enter the column but does not constrict or plug the column because of large pore frits and large resin particles. The column is washed with several steps and then dried in a drying block to remove residual liquid

The PhyTip column is moved to an eluting solvent and pure, concentrated plasmid is eluted from the column into the well.  The plasmids are endotoxin free suitable for Transient Transfection.

Candidate sequences and be process and automated transient transfection can be performed in automated 96 well format. Transfected mammalian cell cultures are produced, maintained and kept alive to generate the therapeutic protein candidates of interest again in 96 well format.

Because proteins are expressed in 96 well format, they may be purified from expression in automated format.  PhyTip column technology enables automation. The automation processes is segmented: automation can be introduced as needed.  R&D productivity of drug candidate examination of express proteins is increased several fold. Qualified drug candidates of interest are transfected in stable cells and undergo further research. Proteins expressed from these cells may also be  processed through automation with PhyTip columns and are assayed.